It may seem obvious that the characteristic state of thoughtless awareness that is Mindfulness dissolves ego: the journey is one of ‘unbecoming’ as we let go of who we thought we were, along with the associated limitations we have allowed to be set of ourselves along the way.  But this lifelong process can be hugely scary and disconcerting as elements of what we have come to see as our character, are challenged and softened. But the ego is a very sneaky construct, reinventing itself endlessly in an attempt to secure its own survival.

For me personally, this has meant that my ego tells me l need to be the ‘most’ Mindful person with the most Mindful responses – l fall into the Trying Trap, cleverly camouflaged by its Mindful guise! I TRY to be more Mindful; l spend time over-thinking – TRYING to intellectually process what the most Mindful response to a situation would be, instead of finding the stillness within me in which the answers rest.

My programming has taught me that l need to have the ‘right’ responses to any given problem – be it my own or someone else’s: l need to be in a position to offer helpful well-considered advice to those around me. Thus in my Mindfulness journey this ‘Trying Trap’ has slightly changed shaped but its narrative remains the same – you need to prove your worth by TRYING, Amanda; by always having the answers.

In many ways the irony here of course is that this is the polar opposite of authentic Mindfulness, as there are no answers to be found outside of ourselves. What we soon realise is that no one really knows what they are doing – we are all making it up as we go along; doing the best we can with what what we have. We begin to ‘know’ less and less as everything we have believed and taken for granted as the truth about ourselves and the world around us, falls away. The security we had in our false mentally-constructed identity – our ego – dissipates as we embrace the truth within ourselves.

I am not not saying that Mindfulness has – or needs to – cost me my empathy, of course, quite the opposite: just that it is not a competition. Whether obvious or not, everyone faces their own battles along the way and deals with them to the best of their ability from where they are.

Yes Mindfulness may be viewed as a costly process – it will cost you your ‘identity’ as you have traditionally viewed it – it may cost you friendships as you shed anything that no longer serves you well, but ultimately it doesn’t require any specific behaviour or belief from you; it’s not a religion or a belief system, it’s a state of being. Here. Now.

There are multifarious techniques to aid us in obtaining a quiet head, in being still, but there is no TRYING. In fact, in essence Mindfulness is the art of acceptance in the present moment – the absence of TRYING.

In holding space for others we often find that they reach their own conclusions as they reflect upon their personal situations within the stillness afforded to them. And of course we may feel we have a Mindful perspective to offer but this is from a place of stillness rather than TRYING. I don’t need to solve anyone else’s perceived problems nor do l need to convince them that Mindfulness is truth: it’s their journey.

There is nothing to prove and nowhere to go. Love and compassion speak through stillness – no TRYING necessary – just BEING. ❤️ 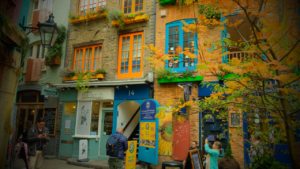 Mindfulness Course Neal’s Yard I’m so glad I’ve got mindfulness, aren’t you? Could you imagine trying to deal with what people have got going on 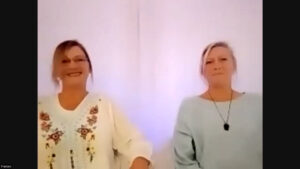 Mindfulness Awakening and Travelling Light Just feel the energy coming off these two shiny bright ladies. Tracie and Frances came on our retreat in August